This award is presented in memory of former Board Member and EBU Treasurer Tom Bradley and is given to a non-serving school teacher who has made a significant contribution to junior bridge. About Tom Bradley The award is made jointly between the EBU and English Bridge Education & Development.

Liz Dale has been the figurehead of and inspiration for the Stamford Youth Bridge Academy since its beginnings in 2016. Using methods closely linked to the National Curriculum for Maths, and therefore gaining interest from 18 schools including nursery, primary and secondary schools, her team of “Buddies” from Stamford Bridge Club have been carefully trained and have introduced Bridge to over 1,700 children and counting. Other bridge clubs have followed Stamford’s lead and are using similar methods to attract even more schools and get more young people playing MiniBridge and Bridge, and Liz is currently working together with EBED to train a small team of “Buddy Trainers” to introduce her methods to other bridge players interested in teaching MiniBridge in schools up and down the country. SYBA has also recently started a weekly junior bridge club, with the assistance of former England Under 26 Squad Leader Alan Shillitoe, aiming to continue the development of some of the young people who have already benefited from their school sessions. 2017: Jessica & Anton Mauve, Kent

The giving of the Tom Bradley Award to Jessica and Anton Mauve is made because of their drive, determination and enthusiasm in starting and fostering School Bridge in the West Kent Area. They had 2 daughters attending the local Primary School at Weald and having taught them the rudiments of Bridge at home, gained the support of other parents in order to approach their daughters’ School with a view to starting a Bridge Club there. The Club started in early 2016 following the acceptance of the idea by the Head Teacher and Staff, they then gained the assistance of a Bridge playing member of the staff and an ‘EBU trained teacher’. They organised the lunchtime sessions, canvassed other parents, obtained the necessary equipment and started the lunchtime Club Sessions. They obtained 20 interested students to attend these sessions, coaching throughout the lessons that followed the EBU prescribed format for mininbridge teaching. Later in the year the Class went on to ‘bridge proper' and learnt card play, tactics etc. At the end of the year the Class were invited by the EBU with another School to play against the House of Lords Bridge Club. The Class performed well in this match and as a follow up the Mauves arranged good publicity for School Bridge in the local Press. In conjunction with their efforts at the School they also helped at the West Kent Youth Bridge Committee’s Ruffian’s Bridge Club held on Sunday Mornings at Tunbridge Wells Bridge Club. This year they have arranged two classes to run concurrently at Weald school, one a beginners class starting with minibridge and another carrying on from the previous year with Acol play. Following the success at Weald School they decided to instigate an inter school Bridge Competition at Weald. The EBU supported and assisted in this venture and other local Schools sent players to participate. The event held in May was a great success and stimulated much interest in the Area, again with good press coverage. The inter schools event will now be run annually. All the above activities have greatly stimulated School Bridge were as a direct result of the drive of Jessica and Anton. They achieved this by the way they obtained the support of the EBU and all those who have interfaced and supported the initiatives. Their enthusiasm for the promotion of School Bridge in the Area is matched by the skills they have to inspire others. 2015: Alan Shillitoe, Bedford 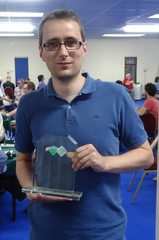 Alan has been an important part of junior bridge in England for many years. He has been involved with the international juniors squads - originally the Under 21 squad and then the Under 26s - for over a decade, and has helped run the Junior Teach-In for the last 16 years. He has also been County Youth Officer for Bedfordshire. Alan was instrumental in developing the Junior Award Scheme for English Bridge Education and Development, working with Simon Barb to introduce it in the autumn of 2015. He is currently helping EBED with initial planning on how online resources would form part of developing youth bridge. You can read a fuller biography for him here. 2014: Dave & Jill Armstrong, Sussex

Dave and Jill Armstrong have been supporters of junior bridge in Sussex for many years. They have provided teaching for many young bridge players in the county, and have been strong advocates of EBU organised junior events, in particular providing a great deal of support for the Junior Teach-In - without their input the JTI would not be a successful event. Young players from Sussex have been crucial to junior bridge in England, and the national junior bridge scene is therefore thankful for Dave and Jill's contribution. 2012: Joan Bennett, Henley on Thames

Congratulations to Joan Bennett who has been awarded the 2012 Tom Bradley Award The schools bridge programme was an idea that Joan formulated in the summer of 2009. Joan sold her accountancy practice and retired from business. At the same time she retired from coaching synchronised swimming and looked for a new outlet for her energy and enthusiasm. She decided she wanted to help increase the number of bridge players by concentrating on teaching bridge to school children. She attended the Partner Teacher course at the EBU and soon after was appointed as the teacher at the local sixth form college who wished to add bridge to its sixth form enrichment programme. Joan worked from the set EBU teaching hands for Minibridge and Bridge and felt she could use the approach at Primary Schools. She recruited volunteers to join her and, with the help of Alison Nicolson, developed two one day teaching courses which allow a volunteer to gain confidence in their ability to teach minibridge and bridge to school children. With the help of the EBU the first twenty volunteers were trained, and a application to lottery fund allowed the purchase of two dealing machines, a thousand boards and packs of cards. Joan is for ever seeking to expand the list of volunteers and has persuaded Berkshire & Buckinghamshire CBA and Oxfordshire BA to share the funding of future courses for volunteers. They also set aside budgets to support the more general expenses of running the project. The county sponsorship has meant that events, including minibridge sims competitions, have been run free of charge with the counties paying the rent and the refreshments. As the project has grown the positive experiences of head teachers means that new schools are actively seeking the chance to take part. Ofsted has been very positive about all of the school bridge clubs. Joan has further expanded the scheme into Hertfordshire and Dorset, with more targets in sight. There are 100+ volunteers and some claim that their own game has improved as a result. There have been very few schools or volunteers drop out, and nearly all the large number of volunteers and pupils involved thoroughly enjoy the experience. Joan is pictured receiving the award from Michael Byrne. 2011: Alan Green Congratulations to Alan Green (Suffolk) who has been awarded the 2011 Tom Bradley Award. The Tom Bradley Award was created after the death of the former Treasurer of the EBU, who was a champion of attracting new persons into the game of bridge. Tom was particularly supportive of endeavours which were aimed at the younger player. Alan has worked extremely hard over the last couple of years in introducing Minibridge and bridge to various schools, which is especially exceptional considering the wide geographical areas that he's reached throughout East Anglia. Alan has now set up a team who assist him with the various schools already involved. He currently has plans to introduce Minibridge and bridge to new schools in the area, please let us know if you can help (at Minibridge@ebu.co.uk). John Pain, EBU Education Manager, said: "Alan has a great skill in teaching all levels and ages of children, and in providing a well-rounded education of the game. He is an ideal recipient of the Tom Bradley Award, because of all the amazing work in the wide geographic expanse of East Anglia." The Tom Bradley Award is assigned each year to a non-school teacher for services to the teaching of bridge in England. 2009: Ken Pattison 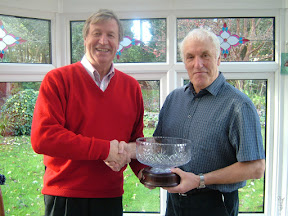 Congratulations to Ken Pattison, NEBA County Youth Officer who has won the 2009 Tom Bradley Award. The award has been given in recognition of his tireless 10 years of working in a number of schools in the Darlington and Teesside area. The Tom Bradley Award is assigned each year to a non-school teacher for services to the teaching of bridge in England. 2008:Bomi Kavarana

The Tom Bradley Award is assigned each year to a non-school teacher for services to the teaching of bridge in England. DR BOMI KAVARANA, age 75, from Tadworth, Surrey has been awarded the Tom Bradley Award for services to the teaching of bridge in his county for 2008. The award was presented to Bomi by Christine Duckworth on behalf of the EBU. Bomi has been interested in card play since his early days in Mumbai, playing rummy with his Zoroastrian aunts and uncles. He studied at Sheffield University where he first started to play whist and then bridge without much knowledge of the ACOL system after he watched it being played during the lunch hour. After graduating with a BSc and a PhD, Bomi joined Watson House (British Gas R & D) in London, and took the game more seriously. He played in the Hammersmith & District and London Business Houses Leagues with a fair amount of success and occasionally in open EBU events. Bomi was later secretary/treasurer of the Hammersmith District League for over 20 years until he retired in 1993. Presently, he is chairman of the H & D League. In 1980, Bomi undertook the EBU's Teachers Diploma Course at the London School of Bridge under the supervision of Alan Hiron and passed the written and oral examinations with GCH Fox as examiner. In 1997, Bomi applied to become Surrey County Youth Officer, because as he says: “I wanted to be able to give something back to a game that I have enjoyed for so long and so much. This seemed the best way.” During the 12 years that he has been the CYO, Surrey has had 10 annual bridge events for schools, and in 2008 he introduced the first one-day bridge teach-in for young people (photos can be seen here). Presently, Bomi teaches three times a week at schools across Surrey. In his free time, Bomi enjoys rowing which he takes very seriously, wines, travelling and painting. 2007: Dave Bessant