This award is presented in memory of Alec who was a teacher who gave much of his time to promoting junior bridge. It is given to a serving school teacher who has made a significant contribution to schools bridge.

The award is made jointly between the EBU and English Bridge Education & Development.

The Fulford School (York) Bridge Club was set up by Rowena in 2011. Over the past 8 years have seen her persistent promotion has led to popularity increase of school bridge. Despite the obvious difficulties of a short time span and the tight schedule teachers have these days, her commitment is remarkable. With over 100 pupils playing, not only have the club had serious players later members of EBU clubs, but also have been open for pupils of lesser ability that has included autism and other disorders. Rowena has been a massive advocate of the EBED Junior Award Scheme since its inception and this Summer have 6 students gaining a bronze. There are very few state secondary schools with bridge clubs and Rowena’s outstanding contribution hitherto unrecognised, is certainly well deserving of the Alec Salisbury Award.

Deb has been the driving force behind the minibridge club at Claremont Fan Court School for around 14 years. During that time the bridge club at CFCS has consistently thrived, and they have sent significant numbers of children of that age range to represent the school in Surrey's junior event, the Surrey Schools Cup. Indeed, they have also been successful, CFCS providing winners or joint-winners in the MiniBridge section in 2005-08, 2010, 2014 and 2015; and in 2018, though none of their pairs won, the school sent 11 players to the competition, the largest MiniBridge entry from any school. In 2017, CFCS introduced the teaching of bridge, via MiniBridge, to the academic curriculum, with Deb at the helm. This is a significant move for bridge in England and, to the best knowledge of Surrey CBA, a first for Surrey – though some schools in Surrey have taught bridge as a one-off initiative, no other school has made it a permanent part of the curriculum. Deb's commitment, enthusiasm, and firm but fun teaching of the game continues to enthuse these very young players, who in turn introduce and encourage their friends and classmates, creating a new generation of players in Surrey. 2017: Sarah Bell (St Paul's Girls' School)

Sarah has been a positive influence on junior bridge since she was a member of the U26 squad and becoming a chemistry teacher. After the announcement of the new U16 category, Sarah was the person who took up the challenge to organise the young players from all across the country to form the first England squad in this age group. Despite its hasty beginnings, this group performed brilliantly and managed 4th in their first ever Junior European championships, qualifying them for the World Championships the following year in Italy. They then managed a creditable 8th place finish despite having lost several members of their team from the previous year and having to field a more inexperienced side. Since its tentative beginnings, the U16 squad has now gone from strength to strength and become a beacon for young players everywhere in the country and that stands as a testament to her efforts. Sarah also has been active within her school, starting up a bridge club which has proved very popular with the pupils and has been a big supporter of the development of the Junior Award scheme being one of the key sources of feedback and critique during its inception. 2015: Stuart Haring (Haberdashers' Aske's Boys' School)

Stuart is bridge master at Haberdashers' Aske's Boys' School, Elstree, and the school bridge team has won the Schools' Cup for the last seven years. He is also involved in helping to develop junior bridge locally and is building links with other schools and their bridge clubs as well as preparing juniors for joining the England squads - a number of his pupils have played in junior international events. 2014: Amy Huber (Carshalton High School for Girls) 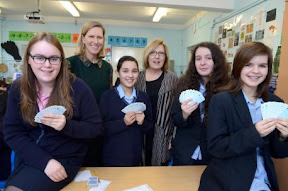 Amy (second left) with some of her bridge club 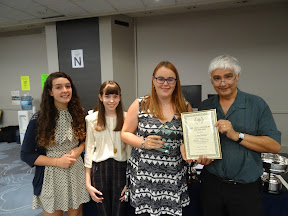 Some of Amy's pupils collect the award from Jeremy Dhondy on her behalf. Amy Huber started a bridge club at Carshalton High School for Girls, and was a strong advocate for the game. Working with local bridge teacher Christine Atwood, the club started with minibridge, and then moved on to duplicate bridge. Although Amy has now left the school, the club continues under the guidance of her colleague Mark Alleston. During her time at the school Amy: - Combined effectively with local EBU teachers and volunteers to run a days’ mini-bridge teach-in - Hosted Lord Skelmersdale, a member of the All Party Parliamentary Group for Bridge, and managed a return visit to the House of Lords (report) - Enabled Carshalton HSG to participate twice in the All Surrey Schools Event (report; report) - Encouraged her pupils to participate in local bridge clubs (report) - Generated strong publicity for bridge in the media and within the school 2012: Cindy Cole (Pembury School, Kent) 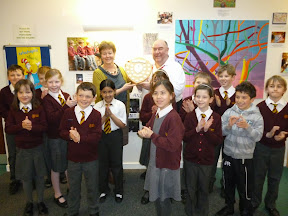 In 2008, the EBU started working on introducing Minibridge to Primary schools across the country. Cindy was one of the first teachers to take up our offer at Pembury School near Tunbridge Wells, Kent and introduced Minibridge to many of her pupils. Since then, Cindy has been a great supporter of our Minibridge initiative and of the EBU Youth & Education Trust. Here are some of the great things she has done for the Minibridge in England: • attended a meeting of the all party parliamentary group for bridge to discuss why Minibridge was good for her school. • attended with her school the first primary school visit to the House of Lords • attended (with her school), the successful journalists day held at the Young Chelsea • worked on a document linking Minibridge with the National Curriculum - which successfully helped us to promote the game to more schools and Parliament. • invited various schools local to hers to play Minibridge and learn the game • sent various pupils to the local bridge club and to support local initiatives • worked closely with the EBU on various initiatives 2011: Mary Mills (Nottingham High School for Boys)

The English Bridge Union has awarded Mary Mills the Alec Salisbury Award for 2011 in recognition of the outstanding service she has given to the development of bridge at her school: Nottingham High School, over many years. Mary has been teaching maths at Nottingham High School (an all boys independent school) for over twenty years. Mary first started playing bridge with friends as a student at Nottingham University. However, it was not until Mary started teaching at West Bridgford comprehensive in Nottingham and became involved in a team of 8, that Mary got a feel for what the game was all about. At Nottingham High School, Mary assisted by her colleague John Allen, runs a lunchtime bridge club. The bridge club meets three times a week and numbers vary from eight to twenty boys playing. The club is open to all age groups and beginners. Nottingham High School bridge club have had a team in the Notts team of 8 evening leagues. This has been a valuable experience for the young players over the years and has given them a good insight into competition bridge. More recently the players have practiced on line. The school also runs a two week House Bridge Competition and takes part in various simultaneous pairs events. Over the years, the school has achieved success at the schools challenge at Loughborough, winning the Schools Cup ,the Harry Scully Trophy and this years, Schools Plate. The award was presented by Graham Jepson in front of many of Mary’s bridge students. 2010: None awarded 2009: Simon Whitehouse (The Grange School, Northwich) 2008: Paul Marx (Haberdashers Askes, Elstree) 2007: Richard Croot (Hereford Cathedral School) The English Bridge Union has awarded Richard Croot the Alec Salisbury Award in recognition of the outstanding service he has given to the development of bridge at his school: Hereford Cathedral School, over many years. Richard Croot was initially taught rudimentary bridge by his father at the age of six, which was followed by lessons from his maths teacher at Fettes school. His passion for bridge continued whilst studying at the universities of Bristol and Durham and in the past few years Richard has represented the county of Herefordshire. He has been teaching bridge at the school since 1995 and has seen a number of his pupils go on to England junior success. Richard has also entered his school teams into the Herefordshire county leagues and the Hereford bridge club competitions. At the moment Richard teaches bridge to his Year 7 classes and plans to set up an after school bridge club in the next academic year. The award was presented by EBU Chairman, Peter Stocken in front of many of Richard’s bridge students. Please click here to view the photos from the day of bridge. 2006: Dean Bunnell (Queen Elizabeth's Grammar School, Wakefield) 2005: Judy Honickberg (Reading School) 2004: None awarded 2003: Megan Starkings (Loughborough Grammar) 2002: None awarded 2001: Gunsel Akyol (Reading School) 2000: Nick Cowan (Blue Coat School - Liverpool) 2000: Mike Vogel (Bedford School) 1999: Mel Starkings (Loughborough Grammar)