The Gold Award is given for outstanding contribution to the management/administration of the game at national and/or international level.

Jeremy Dhondy was presented with a Gold Award in recognition of his long service as Chairman and Vice-Chairman of the EBU, as well as his contribution to the Laws and Ethics Committee (as Chairman) and various other bodies at national, county and club level over a period of many years.

Andrew has been involved in giving service to Bridge for a number of years. In 2003 he joined his county management committee and was also Lancashire’s Tournament Secretary. He was elected to the EBU Tournament Committee in 2007 and became its Chairman in 2008. He stood, successfully, for the EBU Board in 2007, In 2008 he became Vice Chairman and then Treasurer in 2012 before retiring from the post in 2015. Andrew gave a great deal of time to EBU affairs for which the Union should be and is grateful. He was instrumental in the introduction of Universal Membership in 2010, which changed the whole basis of membership and secured the future of the union and its members for many years to come and later did much of the work to enable the start of the charity, English Bridge Education and Development. He is now the Chairman of EBED and is leading it from strength to strength. In the light of the preceding, the Board is unanimous in awarding Andrew its Gold Award, the highest honour it can bestow. 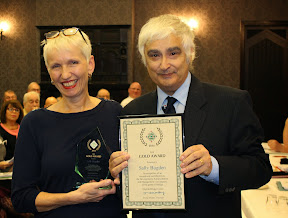 Sally has given great service to the EBU as a board member from 2004, having previously been on her county management committee, vice chairman of the board for two years and then as chairman for five years before retiring from the post in 2013. She has the distinction of being the first woman to hold that office. Sally has given countless hours in the service of the EBU. Amongst her great successes was the introduction of Universal Membership in 2010, which changed the whole basis of membership and secured the future of the union and its members for many years to come. Similarly, as Chairman of the Editorial Board for several years she set in motion changes which will keep the printed magazine, a service many members value, going for many more years. Sally was the Chairman of the Youth and Education Trust which raised funds for Junior Bridge, and was also one of the key players in the setting up of English Bridge Education and Development, the new charity which came into being in 2013 of which she was, briefly, the first Chairman. Education is a topic that has long interested her and she was quick to realise its importance in gaining the EBU the lifeblood of new members. Her work in gaining Bridge a higher profile from cajoling the press to report on the successes of our international teams to liaising with the All Party Parliamentary Group was also both noteworthy and successful. In the light of the preceding, the Board is unanimous in awarding Sally its Gold Award, the highest honour it can bestow. 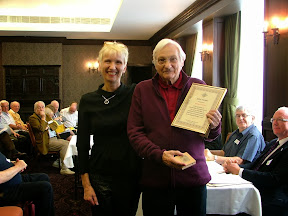 Grattan has given great service both to his county and the EBU over many years. Delegate to the EBU Council from the NWCBA throughout the 1970’s. Elected to the Board of Directors in 1980 and served for 13 years until 1993. Became the EBU Treasurer in 1984. Remembered in this period for improving working conditions and salaries for staff and introducing a pension system and healthcare. A member of the L&E from 1976 to 1991. He became chairman in 1981. He still attends as a Vice President and makes material, useful contributions. He became a member of the WBF Laws commission in 1987. He still serves and has been instrumental in developing the various law changes over the last two decades and is still working on the next edition of the laws due in 2017. He was a very successful NPC of the GB Women’s Team winning medals in the European championship, Venice Cup and Olympiad. He is the current President of Merseyside & Cheshire. He became a Vice President of the Union in 1994.

1992 - Philip Broke; From English Bridge "Philip has been involved in the administration of the game for a great many years and has been a member of the EBU board and tournament committee. In the 1950s he was instrumental in the introduction of the Master Points scheme which has become a feature of bridge throughout the country. Until recently he was also a senior tournament director." - Louis Tarlo; - Tony Priday Gerard Faulkner, EBU Chairman, writing in English Bridge in 1992. "The recent introduction of the Gold Award for outstanding service to the English Bridge Union gave rise to the Council of the Union honouring Vice-Presidents Louis Tarlo and Tony Priday in this way. In preparation for his recent retirement as a practising solicitor, Louis relinquished the post of the Union's honorary solicitor in 1990 after more than 40 years service. During this time he dealt promptly and efficiently with a multiplicity of problems and in particular helped in the complete revisions of the byelaws on a number of occasions as well as a major reconsideration of the Memorandum and Articles of Association of EBU Ltd. He also found time to precede Reg Corwen as Chairman of the EBU during the period 1951-3. Tony was a member of Council from 1956 until 1971 and with only one year's break served on the EBU Selection Committee from 1958 until 1989 when he retired after 72 years as its chairman. He served as a BBL delegate from 1960 to 1977, during which time he was Chairman (now known as President) of the BBL. He was also Vice-Chairman of the EBU during the period 1965-9. Apart from their enormous voluntary contribution to the administration of the game, both men were frequent performers for England in the Camrose series, and won honours in Europe and worldwide, as both players and non-playing captains. It gave me great pleasure to present these awards on behalf of you all as a small ‘Thank you’ to two of our most distinguished members."